“I am the wealthiest man, not just in Europe, but in the whole world. I collect emotions. I am wealthy in that the people of Russia have twice entrusted me with the leadership of a great nation such as Russia – I believe that is my greatest wealth.” Vladimir Putin

The purpose of human futurology research (which is what we at 365 Pin Code Human Futurology are busy developing and specialising in) is to analyse a human’s lifepath by modelling it such that 90 years of forecasted numerical combinations emerge. Once we have these bespoke number combinations (or what we like to call data strings or codes) for a given person, the next step is to carefully analyse them and identify unique moments along their lifepath when different lines of code present. This specific research study reveals why 2020 to 2024 are unique human futurology years Vladimir Putin with 2023 being his emotional watershed, and, even more astonishingly, we reveal why there’s a very high probability that Donald Trump will be making his return as the next President of the United States.

On 1 March 2022, Chris Pleasance writes this for the MailOnline: “Kyiv is today bracing for dramatic escalation in bloodshed as terrifying satellite images revealed a column of Russian tanks and artillery almost 40 miles long snaking towards the Ukrainian capital – seemingly with the aim of surrounding and besieging it. The convoy is made up of hundreds of tanks, artillery pieces, attack vehicles and support trucks that stretches all the way from Hostomel – around 15 miles from central Kyiv – to the village of Prybirs’k – some 40 miles away – mobilised with the intention of bombing the capital into submission. Observers warn that Vladimir Putin’s invasion of his ex-Soviet is about to enter a brutal new phase, abandoning precision strikes against key infrastructure and military bases that met with crushing defeats in the early days of the war and instead resorting to ‘medieval tactics’ to try and force a bloody victory.”

2020 to 2024 are unique human futurology years for Vladimir Putin: How do we know this?

The table of data below reveals the Annual Experience Number (AEN) for Vladimir Putin, from birth to age 100. These numbers are incredibly important to know and understand [Justin Trudeau case study; Steve Schwarzman case study] because they theme if you will, his year, and as such, much can be gleaned from understanding the numerical energetics of the given AEN number defining a given year. The most fabulous numerical intelligence exists where the synchronicity between an AEN and other critically important numbers, happens. What we are seeing right in this world of ours, is a massive struggle for authority, control, and power etc., all traits which are most powerfully aligned with the karmic (as in the spiritual vs the material struggle) numerology number 8. 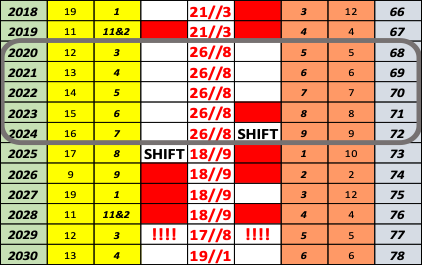 In the above table, note how the 26//8 octave (yellow block) of numerology number 8, plays itself out as Putin’s AEN from 2020 to 2024. The correct way to read or interpret octave 26//8 is: it is the number 6 [6’s dark side is jealousy, troubled relationships and being totally irresponsible] expressing itself through the number 2 [2’s dark side is doing whatever it takes to get even and doing so from behind the scenes], such they how they combine, gives a number 8 outcome [8’s dark side is an autocratic mindset, which is power hungry and desires complete control]. With this 26//8 power hungry octave having been revealed to you with and through Putin’s most bespoke Intelligent Mathematical Blueprint (IMB), you will now understand why 2020 to 2024 are unique human futurology years for Vladimir Putin, because 26//8 never presents again, nor did it ever present before 2020, making this a wholly unusual and unique lifepath octave for Putin. It is unique moments like this, that we search for AEN wise, when mapping a modelling a person’s lifepath, as these are the human futurology moments that reveal so much strategic thinking and planning wise… The AEN defining the years that follow for Putin, from 2025 to 2025, is AEN18//9 which talks to endings / closures / completions of the most extreme nature, with 18 (No8 expressing itself through No1, to deliver a No9 outcome) revealing to us that this is when we will see and if you will, understand, the nature of his darkest shadow (Shadow, think Jung; Major arcana No18 is The Moon etc.).

“We need business to understand its social responsibility, that the main task and objective for a business is not to generate extra income and to become rich and transfer the money abroad, but to look and evaluate what a businessman has done for the country, for the people, on whose account he or she has become so rich.” Vladimir Putin 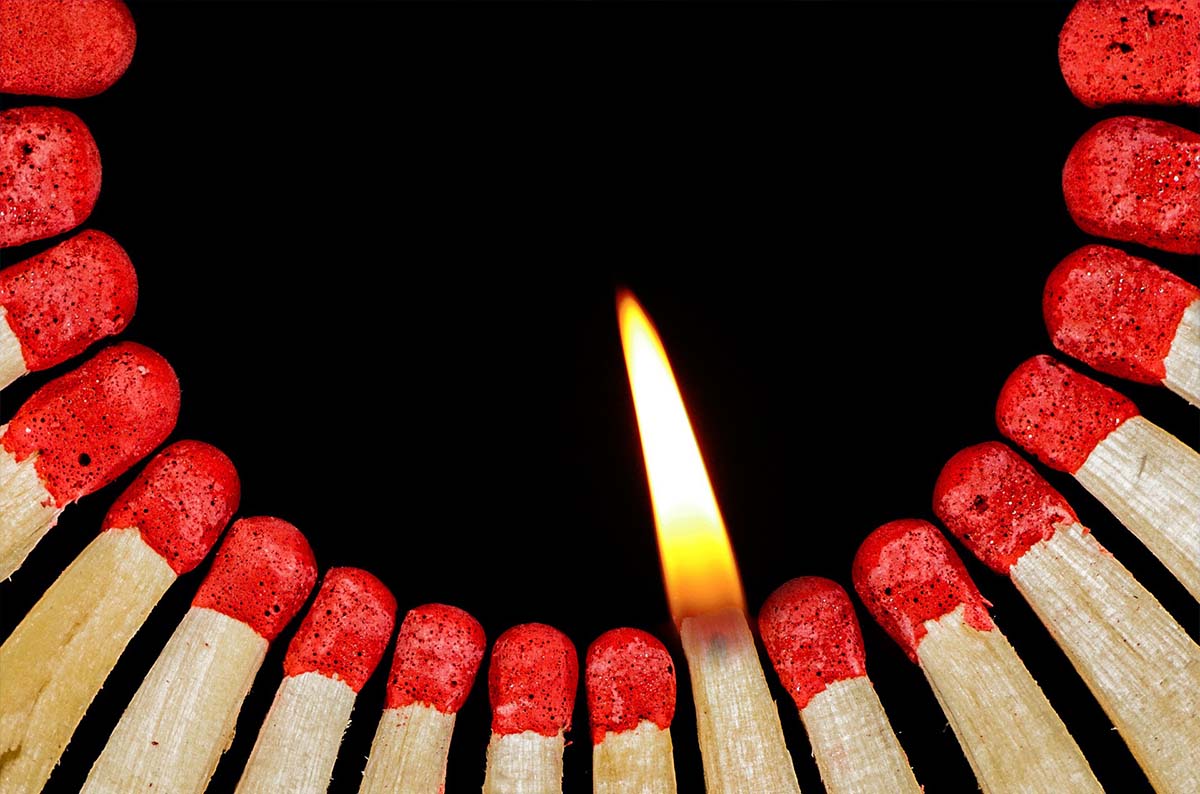 Does AEN octave 26//8 align with any critically important numbers in Putin’s birth chart?

2020 to 2024 are unique human futurology years for Vladimir Putin: his birth chart 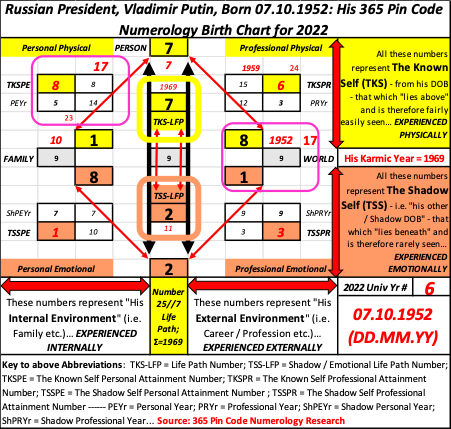 “Russia is opposed to the proliferation of mass destruction weapons, including nuclear weapons, and in this context, we call upon our Iranian friends to abandon the uranium enrichment programme.” Vladimir Putin

Not only does this research reveal why 2020 to 2024 are unique human futurology years Vladimir Putin (with and through octave 26//8) but we can also reveal to you why 2023 will be his emotional power and control watershed. The table below reveals Putin’s personal emotional state in 2023 to be defined by a double 8, which is great cause for concern, because this is when his emotional obsession with power, control, authority will be at its negative zenith. Should we be very worried? Yes, we should. Is Putin honestly interested in negotiations and finding peaceful solutions? No, because his 2023 numbers clearly reveal this therefore, he needs to be stopped now, before it is too late!

Having done a deep dive in to why 2020 to 2024 are unique human futurology years for Vladimir Putin, the perfect way to finish this futurist research article, is to turn our attention to the one and only Donald Trump, 45th President of the USA. Those of you who think Donald Trump is a blast from the past, know and remember this, he is far from done so best you think again!

Step aside Terminator Schwarzenegger, President Trump owns “I’ll be back”

On the 27th of February 2022, David Smith writes this for theguardian.com: “Donald Trump, the former US president, has defended his description of Russia’s Vladimir Putin as “smart” while seeking to blunt accusations that he admires the invasion of Ukraine. Trump reiterated his false claim that the 2020 election was stolen by voter fraud as he argued that the invasion of Ukraine would never have happened if he was still in the White House. “The Russian attack on Ukraine is appalling,” he told the Conservative Political Action Conference (CPAC) in Orlando, Florida, on Saturday night. “It’s an outrage and an atrocity that should never have been allowed to occur. “We are praying for the proud people of Ukraine. God bless them all. As everyone understands, this horrific disaster would never have happened if our election was not rigged and if I was the president.”

Let’s do it a THIRD TIME

Trump recalled on Saturday: “I was with Putin a lot. I spent a lot of time with him. I got along with him … I did a lot of things that were very tough on Russia. No president was ever as tough on Russia as I was. “But with respect to what’s going on now, it would have been so easy for me to stop this travesty from happening. He understood me and he understood that I didn’t play games. This would not have happened. Someday, I’ll tell you exactly what we talked about. And he did have an affinity, there’s no question about it, for Ukraine. I said, never let it happen, better not let it happen.” He added: “I also warned Nato about the danger of Russia and look at the consequences. On foreign policy, the world rightly had a healthy fear that as president I would stand strong for Americans’ priorities.” During an 85-minute speech to a packed ballroom at CPAC, Trump, who contested the 2016 and 2020 elections, also gave his strongest hint yet that he will run for president in 2024. “We did it twice, and we’ll do it again,” he said. “We’re going to be doing it again a third time.”

When me modelled his lifepath and mapped it into key AEN themed data strings, what was astonishing to see was the line of code presenting in 2016, the year he became the 45th President of the United States of America, repeating itself again in 2025. Coincidence? No coincidence? What we can tell you probability wise, is that the chance of Trump running for President again, and winning it (maybe from Kamala Harris, 47th President of the US?) exceeds 0,8 or 80%. Final thought: Putin’s actions seem to be playing themselves out perfectly as per his intelligent mathematical blueprint, and it seems Trump’s numbers are doing the same too through his unique IMB! This begs the question: Are we maybe ALL living in a LEARNING SIMULATION which is scientifically complex and brilliantly designed by beings having a much greater intelligence than ours?