What strategic human futurology insights does the Numerology of The End of Governor Andrew Cuomo provide? To answer this comprehensively, we need to delve into all his core numbers and model his life path using bespoke data. This allows us to create unique experiential year on year datasets or lines of code if you will, with specific reference to 2021 being the year he has been forced into resigning from a massively powerful position by Joe Biden and others.

Fox News 10 August 2021, by Melissa Leon and Jessica Chasmar: New York Gov. Andrew Cuomo on Tuesday announced his resignation effective in two weeks, amid a sexual harassment probe following accusations brought by 11 women who worked for him. “New York tough means New York loving, and I love New York and I love you,” Cuomo said, “I would never want to be unhelpful in any way, and I think given the circumstances, the best way I can help now is if I step aside and let government get back to governing, and therefore, that’s what I’ll do.” The governor started his press conference by saying he’s ‘deeply’ sorry for any behaviour deemed inappropriate during his time in office but denied the sexual harassment allegations contained in state Attorney General Letitia James’ investigation. Cuomo accused state investigators of bias, saying the report accusing him of sexually harassing 11 women from 2013 to 2020 in violation of state and federal law is evidence of a ‘lack of fairness in the justice system’. “When there is a bias or a lack of fairness in the justice system, it is a concern for everyone,” he said. “There is a difference between alleged improper conduct and concluding sexual harassment. Now, don’t get me wrong, this is not to say that there are 11 women who I truly offended. There are, and I deeply, deeply apologize.” Cuomo admitted to making jokes and giving people hugs and kisses, ‘women and men’. “I have slipped and called people ‘honey, ’sweetheart’ and ‘darling.’ I mean it to be endearing but women found it dated and offensive,” he continued. “I take full responsibility for my actions. I have been too familiar with people. My sense of humour can be insensitive and off-putting. In my mind, I’ve never crossed the line with anyone, but I didn’t realize the extent to which the line has been redrawn,” he added. “There are generational and cultural shifts that I just didn’t fully appreciate. And I should have, no excuses.”

Beware the Danger lurking within Numerology No5 and how this opens you to The Cancel Culture!

The one critically important strategic human futurology insight that this case study into the Numerology of the end of Governor Andrew Cuomo provides, is beware the Cancel Culture, especially if you have a preponderance of numerology number 5 in your birth and name charts! Said to be the prevailing number in nature and art, 5 symbolizes fire and the ‘stigmata’. Multi-talented and with many interests, 5’s are attractive, independent, free-thinking, fast moving, and potentially foot-loose. 5 energies are often very sexual beings. Resenting restrictions and responsibilities, 5’s can be reckless and self-indulgent. Number 5 resonates with the influences and attributes of personal freedom, unconventional, individualism, non-attachment, change, life lessons learned through experience, variety, adaptability and versatility, resourcefulness, motivation, progress, activity, experience, travel and adventure, sympathy and understanding, sociability and companionability, release and surrender, influence, sensuality, promotion, natural flair,  vivacious, courage and being courageous, health and healing, idealism, telepathy, pleasure-seeking and pleasure loving, vitality,  vision and the visionary, expansion, opportunity, story-telling,  mercy, kindness, invention, magnetism, competitiveness, imagination, curiosity, cleverness and intelligence, making positive life choices and decisions.

Fear is a powerful weapon. It can excite and motivate, and it can get people to yell and to scream. But fear has never created a job. Andrew Cuomo 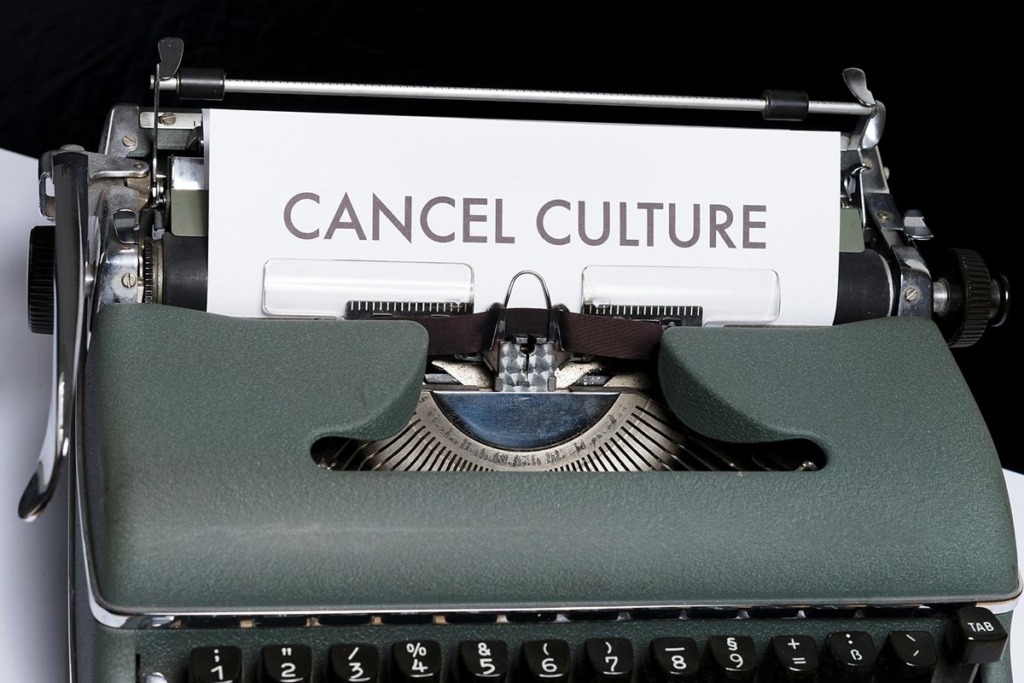 The people who you vote for in this country don’t give a sh** about you!

Alec Baldwin doubled down on his comments on NY Gov. Andrew Cuomo following his resignation on Tuesday amid allegations of sexual harassment. Shortly after Cuomo announced he was stepping down, the 63-year-old actor called the day “tragic” in a tweet that caught almost immediate backlash as people accused him of defending the embattled politician’s actions. Baldwin followed up his tweet by sharing a comment he left to one of his detractors on Instagram. In the lengthy response, Baldwin explained that what he found “tragic” about the Cuomo situation was not that a good politician is now out of office. Instead, he was lamenting that there are so many like him who have become “disconnected” from what the people who voted for them care about. I am not seeking to ‘minimize’ Cuomo’s actions regarding sexual harassment. What he did is wrong. Everyone gets that. And now he is leaving,” Baldwin wrote. “When I wrote that this is tragic, I meant to suggest that nearly all powerful politicians are isolated, in the extreme, from reality. The people who you vote for in this country in the broader, more powerful elected positions, don’t give a sh** about you. Or what you want. They work for their large donors, unions, and corporations. That is how the US System is designed. Powerful people holding on to power.”

I believe we need to attract a new generation of the best and brightest to public service and I believe that government can be a source of inspiration, not degradation. Andrew Cuomo

Numerology of The End of Governor Andrew Cuomo – 2021 Birth Chart 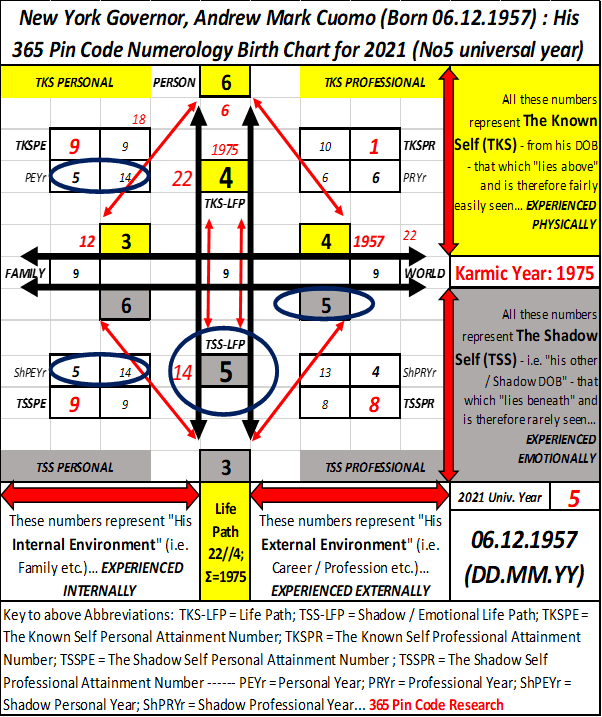 Earlier we raised the point that No5 is the number that lives life large experientially through the 5 senses, see, smell, touch, taste, hear. The above numerology birth chart for NY Governor Andrew Mark Cuomo reveals plenty 5’s happening in 2021, which itself is a No5 universal year (2021 = 2+0+2+1 = 5): 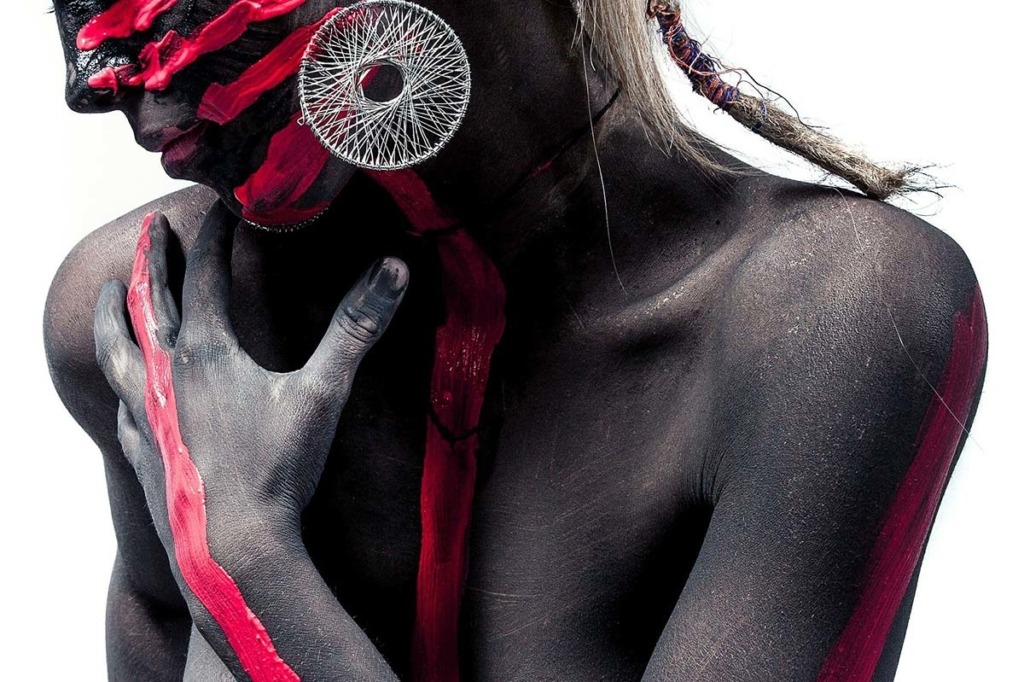 Aside from the 5s, what is incredibly important to note is that Cuomo has two master number 22s in his birth chart. He has a MN-22 life path (see TKS-LFP 1975//22//4, The Master Builder who achieves much through harnessing the collective efforts of others!) and he has a MN-22 world or career number (see Birth YYYY 1957//22//4). Having two MN-22s in one birth chart is extremely rare and indicates extreme success potentiality coded into him through his Intelligent Mathematical Blueprint [IMB], at the professional level.

Returning to the original question: What strategic human futurology insights does the Numerology of The End of Governor Andrew Cuomo provide? Now that we understand some of his core numbers and that he has a karmic debt Shadow Life Path no 14//5, we need to model his life journey through lines of experiential code… 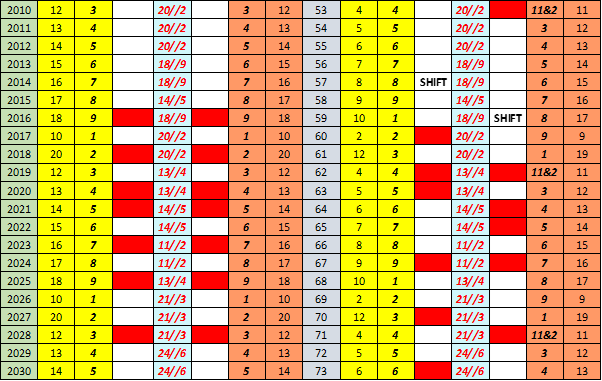 Modelling the life path of Governor Andrew Mark Cuomo born on the 6th of December 1975, reveals that 2021 is themed (Annual Experience Number, AEN) around karmic debt number 14//5, as is 2022. This brings his No14//5 shadow (emotional) life path number into frame as well as his No5 shadow (emotional) world or career number. Within his 2021 data string, karmic No14//5 presents three times (karmic 14//5 personal year; karmic 14//5 shadow personal year; karmic 14//5 AEN [RED]) and to make matters even worse, karmic debt 13//4 presents for him, professionally emotionally. What his IMB data reveals is that on multiple levels, 2021 was coded to be a massively significant karmic debt collection year and this is exactly what has happened. Looking backward, we see that his 2020 and 2019 were powered, or driven, by AEN 13//4 which is the karmic debt octave of his master number 22//4 life path. This reveals that whether he was consciously aware of this or not, the chain of events that led to his August 2021 resignation, started back in 2019 with and through karmic 13 and closed out through karmic 14.

Do you have a numerology question? Ask Greer

The ultimate guide to your 2022 personal numerology year and collective.

Biblical Numerology – What do the Numbers Mean?

What does it mean to dream of babies?