Vladimir Putin born on the 7th of October 1952 has used the Russian army to cynically, and savagely, attack the people of Ukraine, led by Volodymyr Zelenskyy born on the 25h of January 1978. Only eleven days into this shocking invasion, the world has witnessed some of the most horrific atrocities imaginable, events so disturbing that they leave those like you and I who are curious, critical, rational thinkers, with no other option than to conclude that Putin is a narcissistic, autocratic, lying, ruthless dictator who has zero respect for human life and who is totally guilting of the most heinous war crimes against humanity.

This human futurist case study analyses psychopath Putin versus zealous Zelenskyy revealing their interconnected karmic debts (karmic debt 13, karmic debt 14, karmic debt 16) in 2022 and how this year also has the number sequences (AENs) that define the 2022 for Zelenskyy and Putin, synchronising perfectly with each other’s SUN or personal attainment numbers! Since 2016 we have built and analysed thousands of charts which has taken us well over 10,000 thousand hours to do, and never in the 7 years of applied human futurology research that we have conducted through 365 Pin Code, have we ever seen anything like this! The interpersonal karmic debt between these two European leaders is of the highest order which begs the question, are they each other’s nemesis and if so, why is this presenting now [2022//6]?

Elmira Tanatarova for MailOnline and AFP writes: “Horrifying images have laid bare the refugee crisis in Ukraine as Russia continues to shell civilians trying to flee bomb-ravaged cities – amid claims landmines were discovered along one humanitarian corridor. Heart-breaking pictures show civilians trying to flee their homes in Irpin, in the Kyiv region, as loved ones hold onto each other, and people offer to help elderly citizens cross makeshift planks amid scenes of destroyed debris. The images emerged as the EU’s top diplomat, Joseph Borrell said as many as five million refugees could flee in to the bloc if Russia’s barbaric invasion of Ukraine continues. Meanwhile, Red Cross volunteers working out of Mariupol have revealed that one of the route out of the city suggested by Russia on Sunday was covered in land mines. This comes as more than 1.7 million Ukrainians fleeing Russia’s invasion have so far crossed into Central Europe, the United Nation’s refugee agency said today, as thousands more streamed across the borders. Poland – which has the largest Ukrainian community in Central Europe – has received more than 1 million Ukrainian refugees since the conflict began on February 24, with the milestone passed late last night. ‘Today at 20:00 the number of people who escaped from Ukraine to Poland exceeded one million,’ the Polish border guard service tweeted late on Sunday. ‘This is a million human tragedies, a million people banished from their homes by the war.’ A total of 1,735,068 civilians – mostly women and children, as men stayed home to fight – have so far crossed the border into Central Europe, the UNHCR said. Published: 15:05, 7 March 2022 | Updated: 15:38, 7 March 2022.

The interpersonal karmic debt nodes between Putin and Zelenskyy 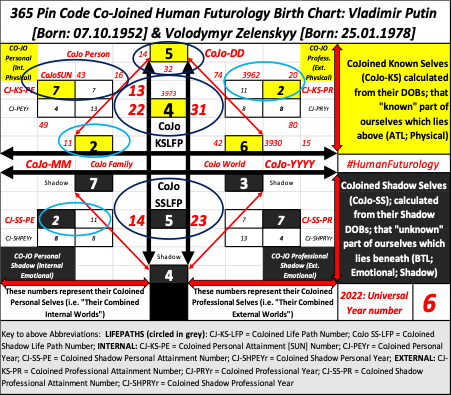 Karmic 14: themed around abuse of personal freedom, indulgence and need to dominate others.

The above CoJoined Birth Chart between Zelenskyy and Putin reveals more interpersonal karmic debt (karmic debt 13, karmic debt 14, karmic debt 16) than we have ever seen whilst building, researching, and analysing, cojoined numerology charts, which are unique to 365 Pin Code Human Futurology R&D. It is if you will, as if they are each other’s nemesis, with their clash being around Putin bringing the darkness [EVIL; and Putin is not alone in this space, so, burning question is, WHEN will his greatest supporters (like China, read this!) rise to back him?] whilst Zelenskyy brings its polar-opposite, the light [GOOD].

By Marisa Schultz, Kelly Laco, Jacqui Heinrich: Fox News, 5th March 2022: “Ukraine President Volodymyr Zelenskyy asked Congress for more lethal aid, more planes, more sanctions and to shut down Russian oil exports during a virtual video call with lawmakers Saturday as Washington weighs more aid to help Ukraine fight off a brutal Russian invasion. Zelenskyy spoke on a Zoom video call with more than 280 senators and House members. He wore a military green T-shirt, spoke aside a Ukrainian flag, and appealed to the U.S. lawmakers for more help. “He spoke from the heart,” Sen. Steve Daines, R-Mont., said on Fox News Channel, adding that Zelenskyy also requested to close the skies with a no-fly zone. The meeting comes as NATO rejected a Zelenskyy request for a no-fly zone over Ukraine to provide air cover for the Ukrainian people. Zelenskyy slammed the decision, but NATO Secretary-General Jens Stoltenberg warned that having alliance planes over Ukrainian airspace could spark a new world war. Ukraine is not a member of NATO and therefore not subject to the Article 5 provision of the NATO alliance that says when one member country is attacked all member countries will take action to assist.” 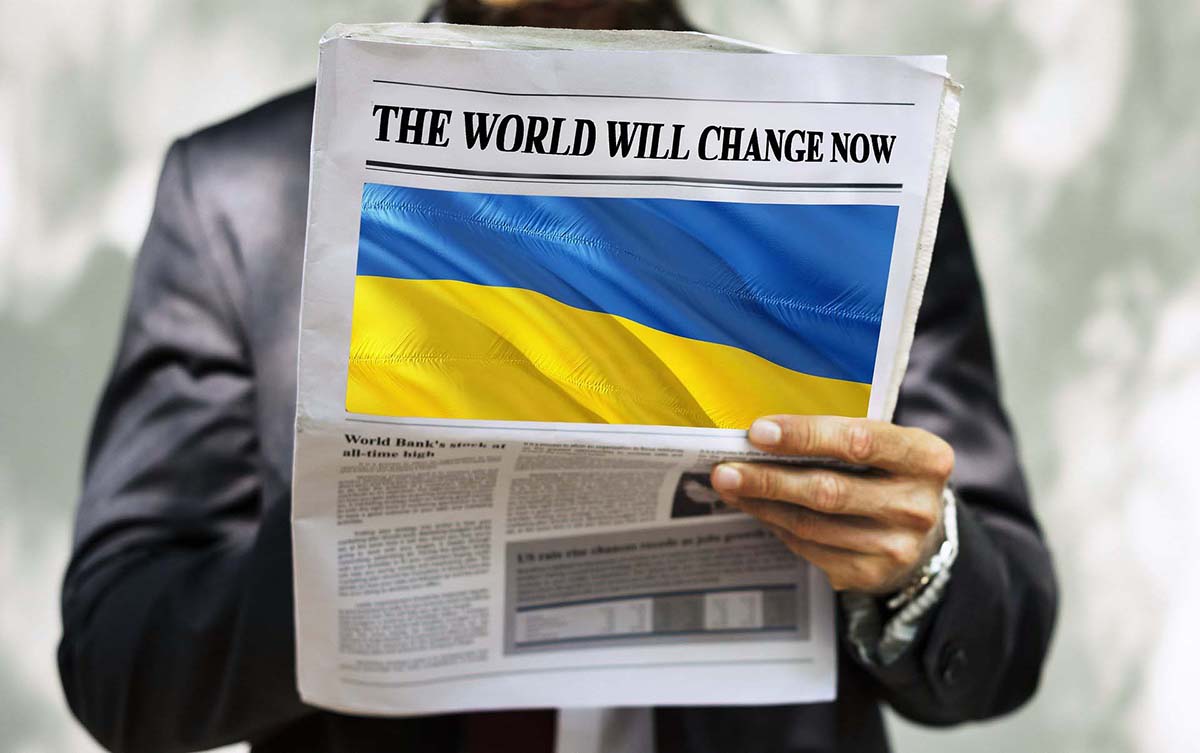 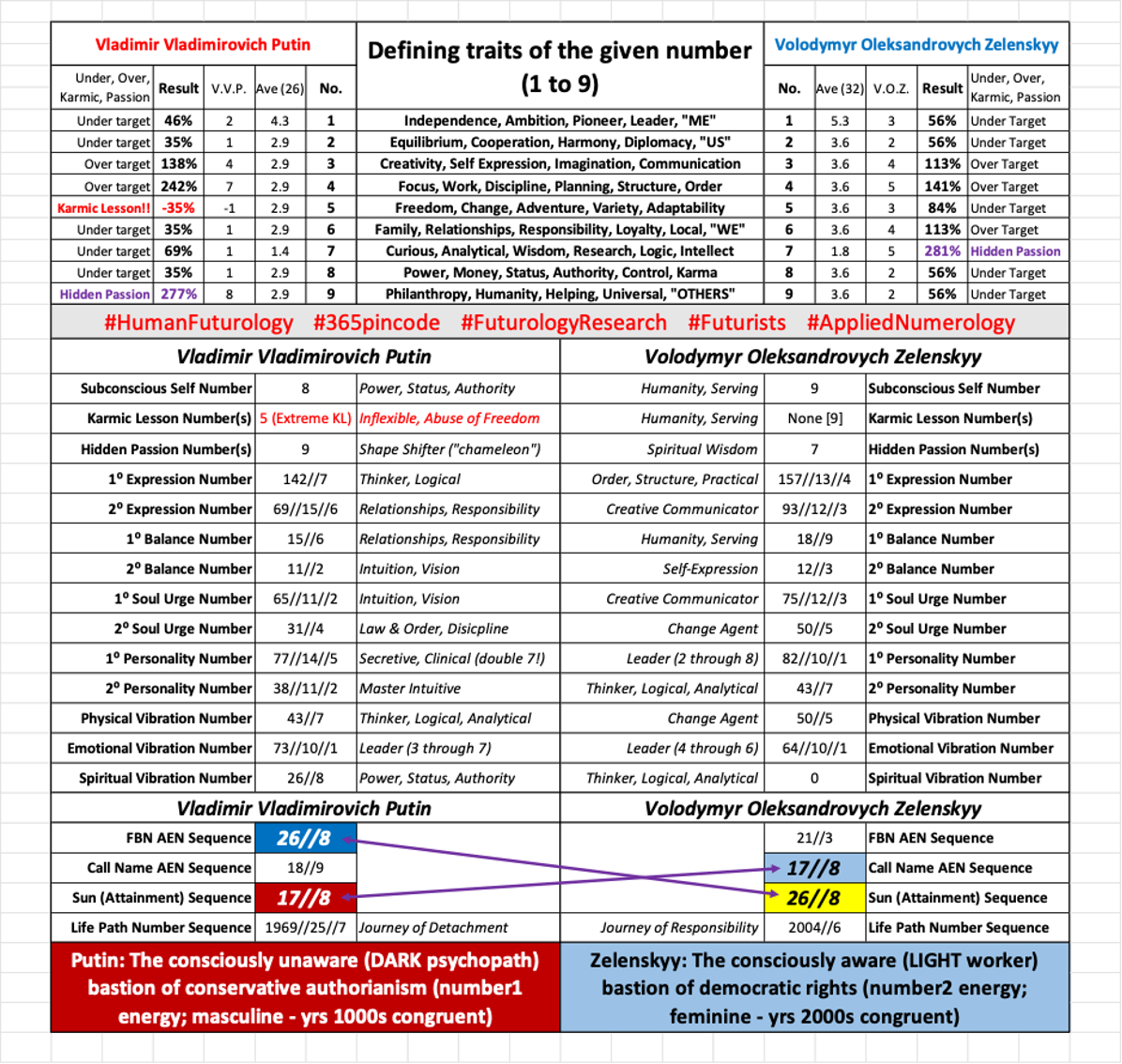 Having unpacked the cojoined interconnected interpersonal karmic debts between psychopath Putin versus zealous Zelenskyy, revealing four [4] massively significant nodes between them, our attention now turns to the above table, which reveals Putin’s ONLY karmic debt as being number 5 related (abuse and misuse of personal freedom). It is significant to note that the day the Ukraine was invaded by Putin (24th February 2022) was a No5 karmic 14//5 universal day (24+2+2022 = 2048 = 2+0+4+8 = 14 = 1+4 = 5; 2048//14//5 – see data table below for extra detail) which synchronises perfectly with his No5 karmic lesson.

Putin’s No9 hidden passion, when embraced from the dark side, makes him extraordinarily dangerous, because DARK 9 is the number that will morph or shapeshift into whatever it needs to be, to achieve its desired objective. Zelenskyy has no obvious karmic lessons, giving him the potential to be a great leader who, given his subconscious self No9, should have the interests of people at heart and champion these over his own agenda. Zelenskyy understands if you will, that leaders exist to serve others, not to cynically and narcissistically, enrich themselves at their expense!

Never has our years of research revealed such an entwined set of numbers!

The greatest revelation which the above table reveals is how Putin’s SUN or Personal Attainment No (17//8) is Zelenskyy’s 2022 Annual Experience Number and Zelenskyy’s SUN or Personal Attainment Number (26//8) is Putin’s 2022 Annual Experience Number (see the two PURPLE arrows). Can it get more personal than this? No! Their respective Intelligent Mathematical Blueprints (IMBs) have attracted each other and therefore guaranteed, this is a karmic showdown of note, one sadly, which will involve the entire world… 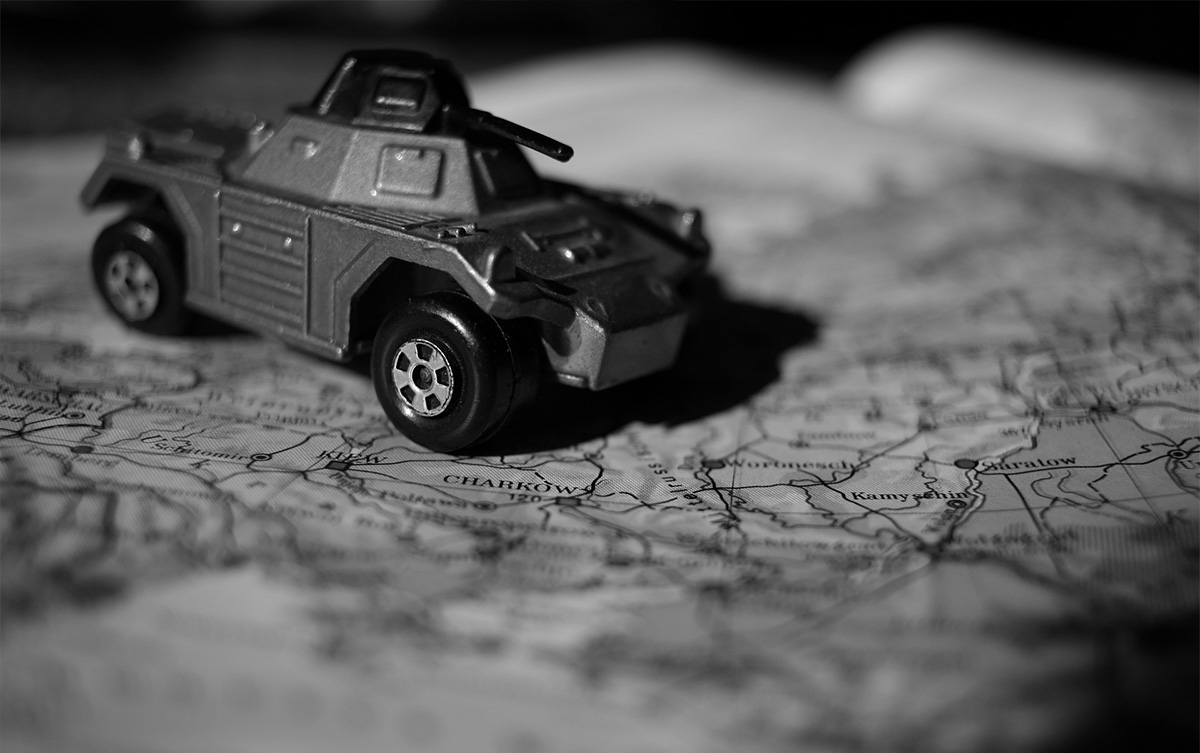 Putin’s numbers reveal just how POWER HUNGRY he truly is!

Looking at the above table of character traits which compare psychopath Putin versus zealous Zelenskyy, you will see how the numbers clearly reveals how power hungry (for personal gain only!) Putin is, whereas Zelenskyy is his exact opposite. It is therefore not surprising that things between these two have come to a head in 2022, which is THE YEAR (2022//6; 3 x 2s and total 6; read more here) when ALL deeply troubled relationships, whether international, national, regional, local, interpersonal (one on one relationships), or intrapersonal (me with me), will have to be faced and addressed. Referencing back to the cojoined birth chart of Putin and Zelenskyy (see top right corner, CJPRYr 8//8) you will see that their cojoined professional year for 2022 is a No8, which brings money, karma (No8 is the human futurology number most rooted in karma!), power, authority, control, leadership etc. into frame. 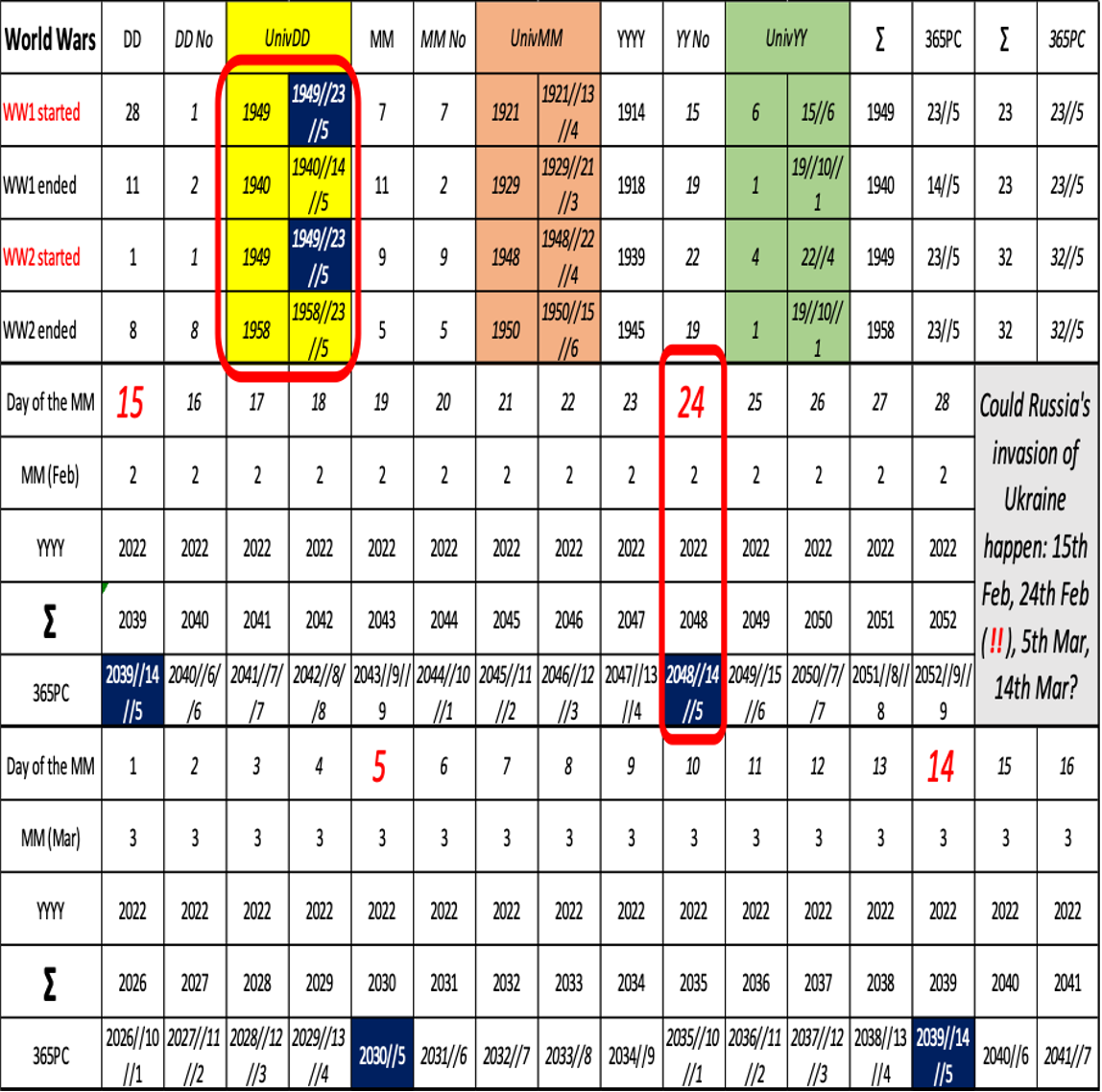